Home / organising fellowship / latest fellowship news / How many climate activists does it take to run a good open space? 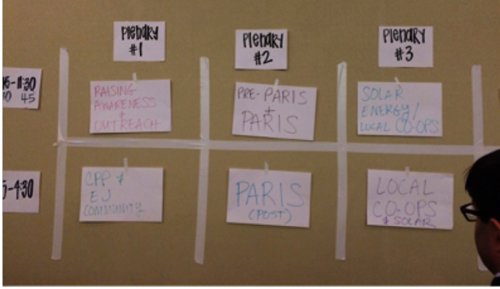 At the US Climate Action Network Conference from Sept 15-18 we had an opportunity to ask these, and learn some key lessons not just about facilitating open space, but about collaborating across a broad and diverse movement, and the role that national meetings can play.

Let’s set the scene. It’s morning on September 16th. We’re standing in the grand ballroom of a conference center in Rosslyn, Virginia. At the front of the room is a stage, and around it are round tables – set up to accommodate the 300 climate activists who are about to walk in.

It’s a diverse group. From Mississippi to Maine, from Kansas to California, from Kentucky to Hawaii, almost every state is represented. We have policy wonks who have worked in DC offices for decades, and grassroots activists in DC for the first time. We have world-renowned climate policy experts, and organizers from frontline communities just now starting climate work. Co-hosting the conference with the Center for Community Change, and inviting the Climate Justice Alliance and EJ Leadership Forum onto the steering committee, was key to this.

It’s a critical moment for the climate movement. The Paris Climate Talks are less than three months away, and the 2016 elections raise big questions about our movement’s long-term power. Long-standing tensions between the environmental justice (EJ) movement and the ‘big green’ climate movement have begun to thaw, and leaders from both movements have been part of the planning team and invested time and resources to bring their people into the room.

In this context, our meeting aims to build relationships between leaders from across the scope of the movement, and to host a conversation about how we can work together this year to win.

How We Ran it

The conference proper ran for two days, from Wednesday to Thursday, book-ended by a service day and a lobby day. The agenda (which you can see in full here) puts the first day’s emphasis on building energy and relationships between participants, with the second day’s focus on getting down to work on deepening collaboration and identifying shared strategy.

Our facilitation team had 5 facilitators, drawn from different parts of the movement (faith, EJ, economic and racial justice, and climate). Most of the work of this team was in covering the many planned breakout sessions, supporting over 30 facilitators drawn from our membership, but some members of this team were charged with leading plenary sessions. Natalie Finstad (who you can read about here) had responsibility for leading the open space part of the agenda.

The question or ‘theme’ of the open space was ‘Where can we collaborate better as a climate movement to win?’ We allowed 60 minutes for the open space marketplace, which Natalie ran. The first 20-30 minutes was spent introducing Natalie as facilitator, and the key concepts of open space. Participants were then invited to come up to the microphone one by one, read their session cards, and stick them on the ‘bulletin board’ where we had two support facilitators identifying areas of commonality and inviting participants to ‘cluster’ their ideas. 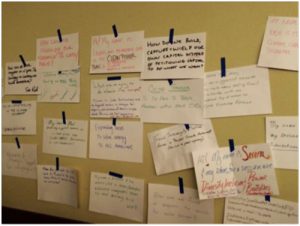 Once all of the ideas were on the wall, participants were given 5 stickers each to ‘vote’ by placing these on the cards. The two support facilitators covering the wall then identified those ‘clusters’ with the most votes, and read them out to the room. A third support facilitator then wrote these clusters onto cards, and we placed these cards onto the ‘agenda’ which had been drawn out with masking tape on the adjacent wall. The proposed sessions matched the number of open slots almost exactly. For those ideas that didn’t make the agenda, participants were invited to have the discussion over coffee. 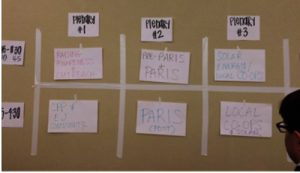 You can see the full facilitation plan for the marketplace here.

Based on our debriefs with facilitators, staff and all participants, we identified these strengths.

Participants had many prompts to develop open space ideas before the marketplace began. Through (a) a webinar for all participants a week before, (b) one-on-one outreach to our members, (c) several moments in the plenary on the morning of the first day, and (d) the caucuses for constituencies and regions on the afternoon of the first day, we were ‘priming the pump’ and encouraging participants to propose the discussions that they wanted to have.

As a result, we saw a huge shift in the proposals brought forward. On the webinar, the ideas being raised were disparate and divergent from one another. By the end of the marketplace, we had discussions about more equitable funding distribution, our strategy for beyond the Paris Conference, climate refugees, co-ops and solar energy, faith and spirituality in climate work, and making the Clean Power Plan work for low-income communities and communities of color.

The ‘bulletin board’ and ‘agenda’ were posted on the side wall of the ballroom (with masking tape), and we cleared away the tables for that side of the room to allow participants to move around. The marketplace occurred with almost all participants standing and moving around, which — combined with the fact that we developed proposals and the agenda in real time rather than beforehand — led to fun, chaotic energy in the room. The marketplace became a natural energizer to start off the morning of the second day (after the reception the night before).

The idea of inviting participants to use stickers to ‘vote’ for their sessions helped to identify (to facilitators and participants) which sessions or ‘clusters’ were of most interest to the room. This brought the room closer to a consensus on the sessions that needed to go on the ‘agenda’, and the sessions that needed to be combined, as opposed to those that were best had between 3 people over coffee. As a result, we were able to move from the ‘bulletin board’ to the ‘agenda’ fairly quickly (in 20 minutes) and with a minimum of disagreement.

Having a clear coordinator tasked with thinking about the open space sessions throughout the conference was key. Having that person be an experienced facilitator in Natalie, with the energy and confidence to hold the space and improvise where necessary, was essential. But at the same time, having a team of facilitators to help with the marketplace was very helpful. Two support facilitators on the ‘bulletin board’ allowed the process of convergence to occur while people were still reading out their ideas. The third facilitator became invaluable at the most hairy part of the process (the combining of sessions) as they were able to quickly write up cards to capture ‘clusters’ and combined sessions, to reflect the discussion as it was occurring. Having a team of facilitators to cover 2-3 breakouts each, moving between groups to keep them on time and move them towards next steps, also helped in the report-backs and plenaries.

What Could Have Worked Better

During the part of the marketplace where participants read out their session ideas at the microphone, some participants took longer than others to read theirs out, and despite being asked to read the title only (i.e. not to give a ‘pitch’) some participants gave a pitch. This did not affect overall time (we were on time for this section) but it did lead to some inequity in that those who spoke for longer tended to be those who generally took up more space in discussion. In future, we would have an audible time limit (like a ‘gong’, or oscar’s wind-up music) to avoid this.

The trickiest part of the marketplace was in combining all of the ideas on the bulletin board into ‘clusters’ and getting them into the agenda. This is where we ran 15 minutes over time. It is also where we saw some inequity in that some voices were heard more loudly than others in combining ideas, and some of the combining seemed less a ‘merger’ than a ‘takeover’. In future, we would (a) maintain having 2 facilitators responsible for monitoring the bulletin board when cards were going up, suggesting potential clusters, (b) give those facilitators a more assertive role in identifying clusters and suggesting them back to the room, (c) keep the lead facilitator completely out of this discussion, so that they can monitor the space as a whole, rather than dive too far into the details of sessions and combinations. We would also (d) require that all those who proposed cards must agree to them being clustered (not just the louder ones).

In the open space breakouts with 5-15 people we saw some good conversations happening and some good work being done. In some of the larger breakouts, however, (eg those around the Paris Conference, which had around 30 participants) some challenges arose. Participants reported that the size of the group and the diversity of backgrounds (i.e. some people were experts wanting to talk strategy, and others needed a ‘Paris 101’) limited useful conversation. Wanting to honor the ‘openness’ of the open space we did not intervene; however, in future we might consider interrupting groups to ask the facilitator/the group whether it would make sense to break the group into smaller groups of 6 people. We might also put together a 1 pager with some ‘facilitation tips and hints’ for those who arose as breakout facilitators, to assist them with those breakouts which are larger and harder to manage for high quality discussion.

The only interventions that our facilitation team made in the open space breakouts was to ask that the last 15 minutes be spent developing ‘takeaways’ and ‘concrete next steps’, and that these be written down and reported back to the plenary. This helped to move the groups forward and ensure that the discussions could move into actions to be taken after conference. However, we did not do a good job of capturing these notes – our system for collecting notes throughout the conference was using google docs, so we did not have a system in place for capturing flipcharts notes and much of the work of these open space breakouts was not captured.

In the closing plenary we asked participants what worked about the conference and what could have worked better. We received strong positive feedback about the open space part of the conference, despite the fact that this was new to our network, and that many participants had never been part of an open space session like this before. In a context where a very diverse group of activists are concerned with a very pressing challenge to our planet and our people, we learned that climate convergences which give leadership to participants can be a great way to bring new people in, and identify areas where deeper collaboration can make us stronger.

Did you miss Australia’s biggest online progressive conference? Or do you want to revisit some of the...