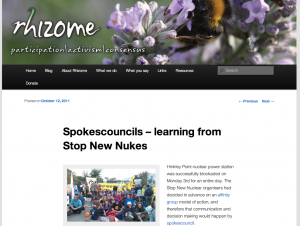 By the time I arrived at the camp the first spokescouncil meeting had already taken place… Everyone was welcome and affinity groups sat behind their spoke in the traditional ‘pizza slice’ formation with spokes effectively working in a fishbowl. However it was discovered fairly rapidly that groups weren’t content to communicate through their spoke and lots of other voices tried to make themselves heard. The result was that by the time I arrived the camp organisers had already decided on a ‘spokes-only’ model for the remainder of the camp.