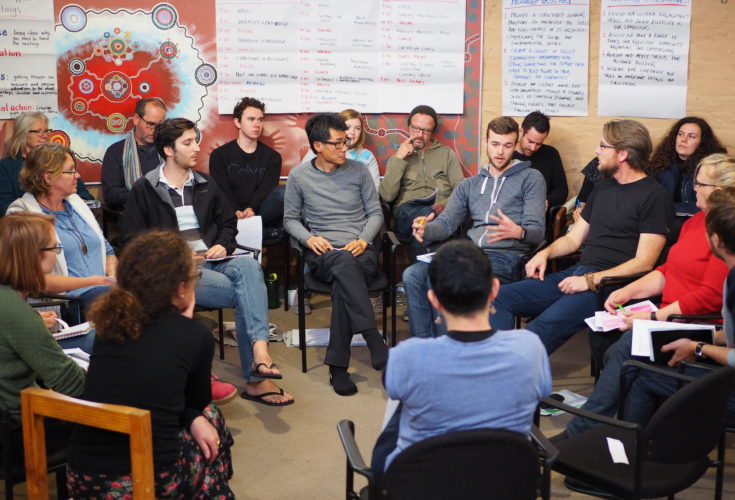 Monitoring and evaluation have been a focal point for the Change Agency’s Community Organising Fellowship since its inception in 2014. In this update, we lift the hood to share what we’re learning about the Fellowship’s impact.

Our training team are guided by an evaluation ethos that lifts up transformation above transactions, and that doesn’t simply count those things that are easiest to count. We look to different kinds of data, using several different methods. After every residential workshop we survey our cohorts to ask how they’re applying new tools and insights. Then we survey again at the end of each year. Our training team meet after each day of training to reflect and share our observations on learning outcomes and group dynamics. And we rely on dialogue with the social movement organisations whose team members participate in the Fellowship. Are we equipping organisers with the skills, confidence and connections to campaign effectively?

These methods help us track five metrics or indicators of impact.

1. Fellows sharing their skills, training others: We monitor this closely. To build and sustain a powerful people’s movement, organisers need to continually recruit and train, identifying and cultivating leadership. This work doesn’t end. Between March and September 2020, our cohort led 130 workshops for 3,064 members of their teams and communities. Many graduates have created their own ongoing training programs, with COF-inspired fellowships now offered by the Australian Conservation Foundation and other conservation groups, Democracy in Colour, AYCC and GetUp. We’ve trained 150 organisers; they’ve trained thousands. This was our intention and perhaps our greatest achievement.

2. Graduate destination: We follow the paths of our graduates closely. Some come and go, dipping into other pursuits and passions. But most are in leadership roles in Australia’s social movements. They’re committed and well-trained! To illlustrate: Jacqui Mumford supports the 150 member groups of the NSW Nature Conservation Council and convenes their annual conference. Melinda Millen is network organiser with the Climate Action Network of Australia where she supports scores of large and small climate action groups and their campaigns. Murrawah Johnson (COF2015) is a spokesperson for the Wangan and Jagalingou Family Council in their opposition to the Adani coal mine. Claire O’Rourke leads the national Beyond Coal campaign, pushing for a just and rapid transition to renewable energy. And Ellen Roberts is national director of Solar Citizens. While she was with GetUp, Ellen supported the hospital vigil to prevent ‘baby Asha’ from being deported. The campaign built alliances between human rights advocates, lawyers, unions and health professionals.

3. Diversity of our cohorts: More than 20 civil society groups have enrolled multiple team members in COF. In fact, we’ve had cohort members almost every year from 350.org, ACF, Lock the Gate’s grassroots network, Doctors for the Environment, Australia’s Religious Response to Climate Change and other civil society groups. We intentionally recruit from large and small, rural and urban, grassroots and professionalised campaign organisations, bringing together folks from the environment and climate movements, unions and faith-based institutions. They learn from each others’ perspectives and – by virtue of trusting relationships forged during COF – are ready to work together for the common good. Impressive campaign alliances have formed during our workshops. This diversity has only been possible with the generous support of 11 individuals and foundations, allowing us to offer targeted scholarships and bursaries to Aboriginal, rural, remote and grassroots organisers.

5. Ongoing connections and social capital: We held our first graduates’ retreat in Sydney in 2016, and a second in 2018. Fellows consistently tell us that the connections and relationships they form during COF are the most valued outcome. We’re more likely to work together on campaigns when we’ve built solid, trusting relationships. This strong and growing network was powerfully evident when I looked around the room at the most recent national Beyond Coal and Gas gathering and counted 45 of our graduates among the 300 participants.

We have big plans. Hopefully, it will be safe to bring our cohort together for a face-to-face workshop later this year. We’re also planning an alumni retreat in the new year, bringing together our national network of 175 graduates. We plan to invite applications for next year’s Fellowship from 1 August.

As long as you feel powerless and unable to do anything about [your problems], all you have is a bad scene. The people resign themselves to a rationalization: it’s that kind of world; it’s a crumby world; we didn’t ask to come into it but we are stuck with it and all we can do is hope that something happens somewhere, somehow, sometime.

This is what is usually taken as apathy.
The Change Agency
2014-05-19T15:18:01+10:00
As long as you feel powerless and unable to do anything about [your problems], all you have is a bad scene. The people resign themselves to a rationalization: it’s that kind of world; it’s a crumby world; we didn’t ask to come into it but we are stuck with it and all we can do is hope that something happens somewhere, somehow, sometime. This is what is usually taken as apathy.
https://www.thechangeagency.org/testimonials/saul-alinsky/